Art with Cyrus at Rescue Ranch

Here's a great shot of Arthur (with Cyrus) taken by Lydia Marano! 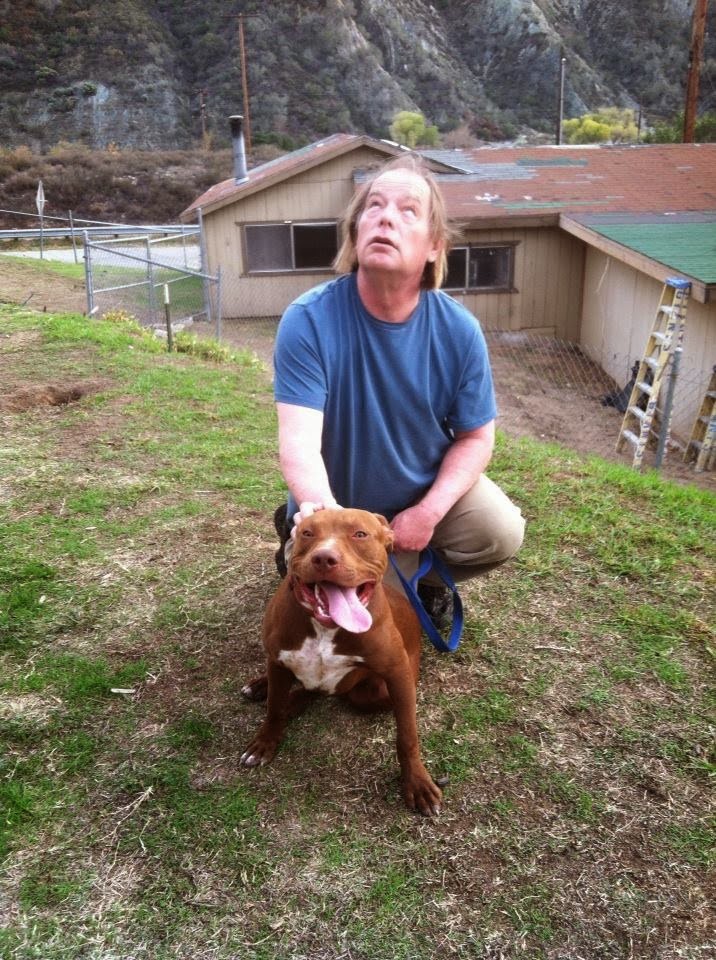 Email ThisBlogThis!Share to TwitterShare to FacebookShare to Pinterest
Labels: photo

Email ThisBlogThis!Share to TwitterShare to FacebookShare to Pinterest
Labels: film and television 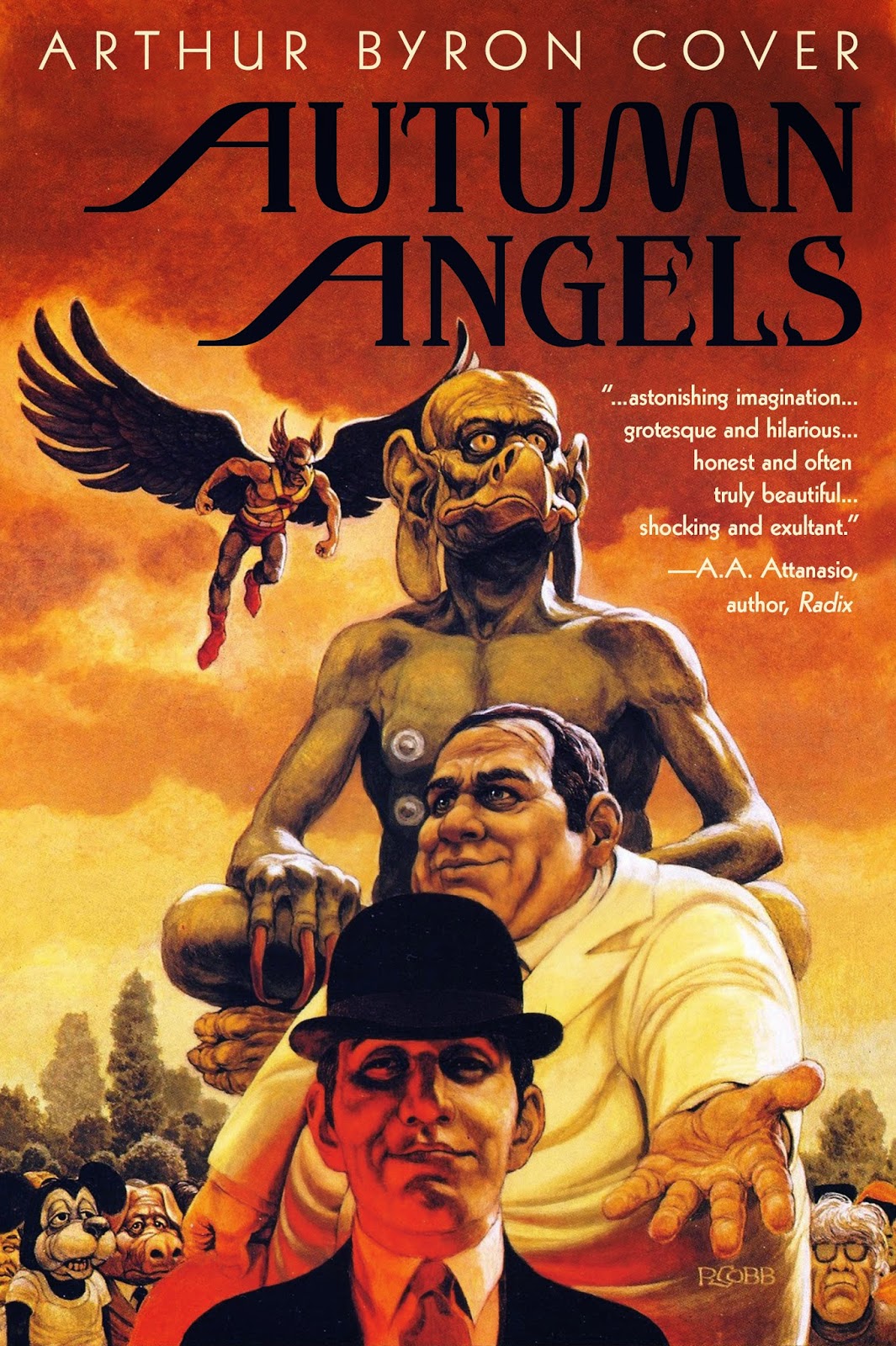 "Autumn Angels is a feast of strangeness populated by extraordinarily exotic, and yet deeply human characters. In part satire, in part thought experiment, Arthur Byron Cover's book is an exploration of the meaning of humanity, and is filled with enough wild images and witty dialogues to equal five books by a lesser writer. A must read." –Steam Dave, Amazon

This edition features introductions by both A. A. Attanasio (author of Radix) and multiple Nebula and Hugo Award winner, Harlan Ellison, as well as a very special Afterword about the writing of the book by Cover.

Digital Parchment Services is especially excited to be able to present this new edition with the stunning cover painting by Ron Cobb, the internationally acknowledged artist and illustrator who worked on films such as Star Wars and Alien, from the original edition.

The ebook edition of Autumn Angels is available now – with a trade paperback edition premiering in January, 2015.

"Three Godlike men (the lawyer, the fatman and the demon) ... seek to give a godlike humanity depression, in an attempt to make their race seek purpose and become the ultimate species in the universe. What follows is ... a novel which plunges you into an original sci-fi world which raises thought provoking questions throughout the plot ... fast paced with engaging and unique characters ... thought provoking and emotive ... Buy it now or I will send you to the antimatter universe."
–Adam Gent, Goodreads

The book that ushered in the 21st century – in 1975! So far ahead of its time that no one knew what to make of it!

"…recommended to readers of Douglas Adams or Terry Pratchett."
–The PorPor Books Blog

Autumn Angels is a fast moving, anarchistic romp, filled with pop culture references, in which the clichés and conventions of sci-fi are used as slapstick props, written four years before Douglas Adams' Hitchhiker's Guide to the Galaxy–

"It takes the materials of everyday entertainments—pulp heroes, movies, comics, detective stories—and transforms them ... into a gestalt that is fresh ... the lawyer is modeled after Doc Savage's sidekick, 'Ham,' Brig. Gen. Theodore Marley Brooks; the fat man is Sidney Greenstreet; the gunsel is Elisha Cook, Jr. in The Maltese Falcon; the Big Red Cheese is Captain Marvel; the Insidious Oriental Doctor is Fu Manchu; the Queen of England who calls herself a virgin is Elizabeth I; the ace reporter is Lois Lane; the zanny imp from the Fifth Dimension is Mr. Mxyzptlk, and both the imp and Lois are, of course, from the Superman comics; the godlike man with no name is Clint Eastwood in the Sergio Leone-directed spaghetti westerns; the galactic hero with two right arms is Harry Harrison's Bill, the Galactic Hero; the fuzzy (but boring) little green balls of Sharkosh are Star Trek scenarist David Gerrold's tribbles; and you can figure out for yourself the true identities or esoteric references for The Ebony Kings, the poet, the shrink, the bems, the other fat man and his witty leg man, and on and on."
–Harlan Ellison

"...agile inventiveness ... extraordinary salience and outlandishness ... astonishing imagination ... grotesque and hilarious ... honest and often truly beautiful ... shocking and exultant ... nothing like the usual SF fare. I read it through in one sitting."
–A. A. Attanasio, author, Radix

Read Autumn Angels now ... you'll be glad you did!

Check this out: the lovely Digital Parchment Services/Futures-Past Editions ad we will be running in the LOSCON Program Book ... featuring many SF books by current and past LASFS members ... like Arthur Byron Cover! 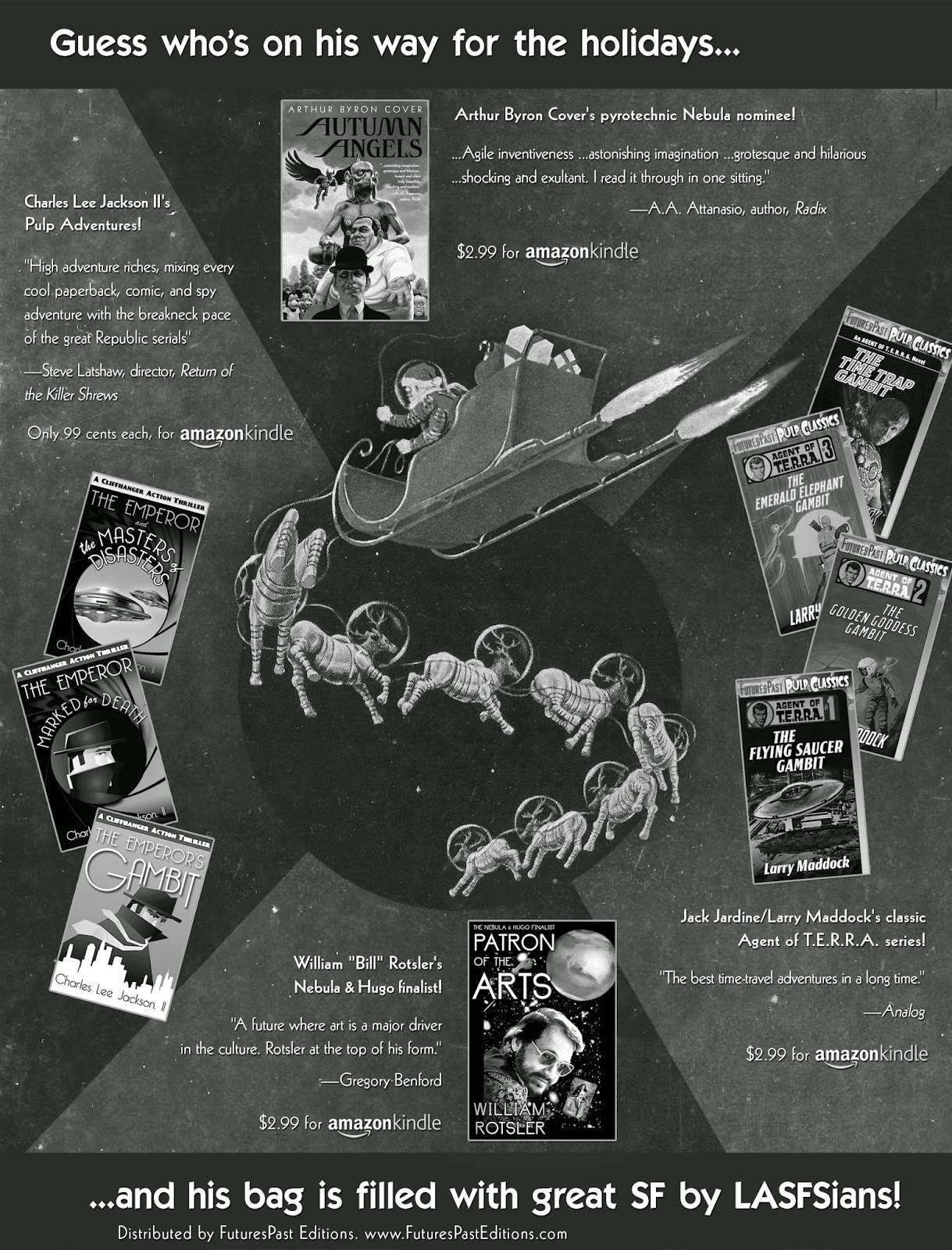 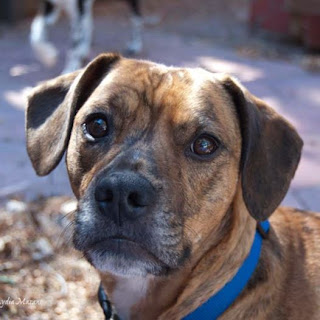 
Elvis needs your help. As you may know, Art and I literally picked him up off the side of the road, in March, where he'd been hit by a car. Our vet gave him a 25% chance of walking again. We worked hard, everyday, to rehabilitate him and Elvis beat the odds. He can run now but as winter approaches it becomes more and more obvious that he still needs ACL surgery. The cost: at least $1500. That's half of what we already spent and, frankly, we're tapped out. Saving up on a fixed income is hard, but we’re trying.By sheer chance, we noticed that Elvis has a tumor in his mouth which is growing over his side teeth. The vet said it had to go ... duh. In one week it’s extended to his lower, right canine. The vet estimated it will cost about $700. We put down what we had — $100 — but he needs more. To date, we've raised an additional $364 -- more than half of what we need for his oral surgery! If you can donate any amount it would be greatly appreciated.

http://www.redbubble.com/people/Telzey. Elvis will get $4-6 per item sold. You can send funds to lcmarano@gmail.com at PayPal. Or, better yet, send money directly to my vet: Rim Forest Animal Hospital at 909-337-8589.

To those of you who have already donated, you have our eternal thanks. Everyone else -- thank you for listening. Asking for help is the hardest thing I've ever done, but Elvis is worth it.

Please help any way you can!  As Lydia has said, Elvis is more than worth it!

(from the Digital Parchment Services blog) 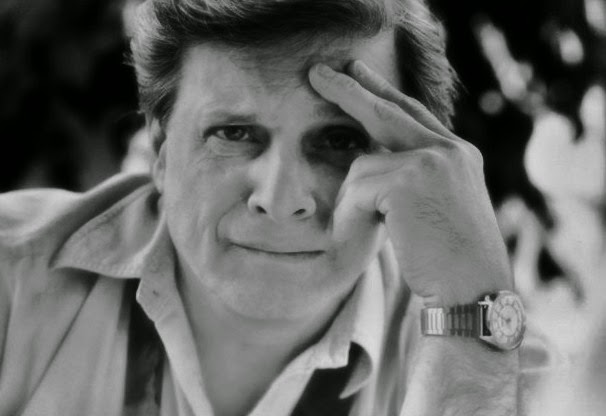 We just heard from Josh Olsen that the legendary Harlan Ellison has suffered a stroke:


My dearest of dear friends Harlan Ellison had a stroke last week. A lot of people are asking, so here’s the deal - He’s comfortable, and resting in hospital. If one was going to have a stroke, this was the one to have.

I was with him the day before yesterday when the specialist who checks verbal and memory impact was there, and it was like an SNL skit. She’s checking for slurring and loss of memory, and he’s being quintessential Harlan - talking a mile a minute, and throwing out more obscure references per minute than anyone can possibly keep up with. (He did, at one point, forget the name of an actor with a wooden leg who played a supporting part on one of his favorite radio shows back in the forties, but last time I talked to him, he couldn’t remember the name of the key grip on Passage To Marseilles, so it's probably safe to say that’s nothing to worry about. )

I can’t say he’s fine, because he’s had a stroke... but he’s as well as well can be under the circumstances, and had all of the nurses laughing. And he complained a lot. So, you know... Harlan.

If you’re the type who prays, it’s probably not worth it, because he doesn’t believe in that shit. That said, it will annoy him, so go ahead. He’s resting and cantankerous, and completely Harlan.

We wish Harlan the absolute best and a very speedy recovery - and huge thanks for allowing us to use his wonderful introduction to our new edition of Arthur Byron Cover's Autumn Angels. 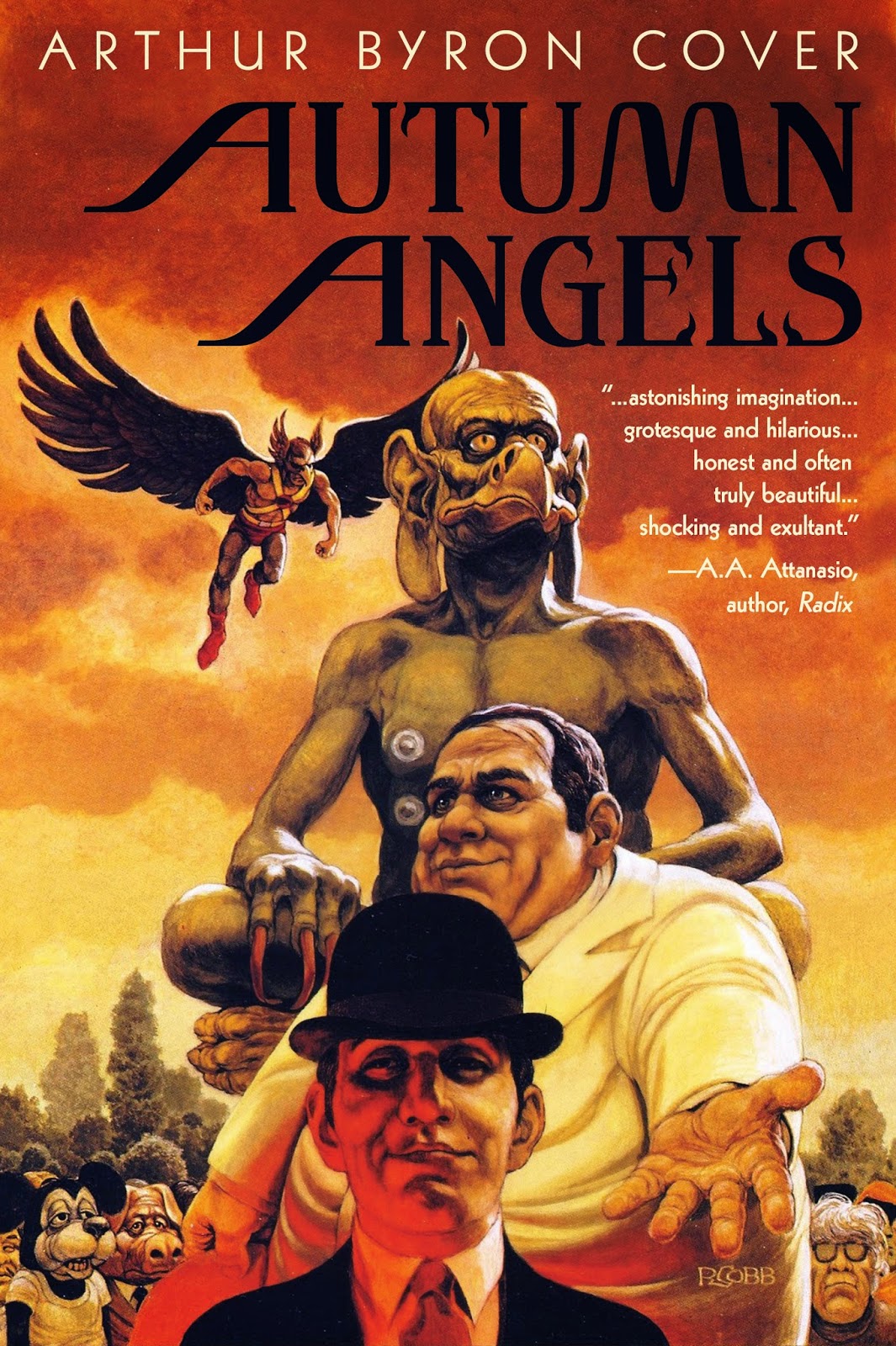 Original Cover For Platypus Of Doom

Here's the cover for the 1976 edition of The Platypus Of Doom And Other Nihilists by Arthur Byron Cover - painted by the comic book legend Neal Adams! 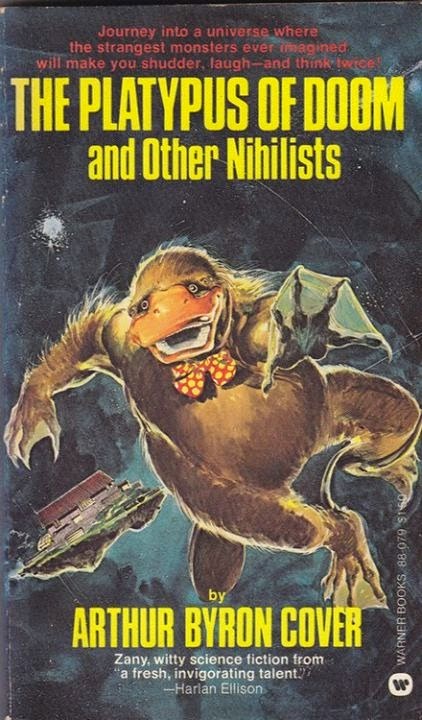