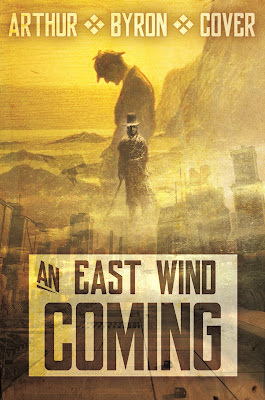 
Digital Parchment Services, through its Strange Particle Press science fiction imprint, and Arthur Byron Cover are extremely thrilled to announce the publication of an enhanced edition of Cover's follow-up to his Nebula-nominated Autumn Angels, book two in his Great Mystery Trilogy, An East Wind Coming.


"An East Wind Coming is a decadent smorgasbord oozing sex and nihilism, peppered with the thrills of various pulp fictions and comic-book universes. In a far future the iconic characters of nineteenth- and twentieth-century pop culture have been reborn, all of them referring to themselves coyly as "the consulting detective," "the good doctor," "the Big Red Cheese," etc. Imagine Moorcock's Dancers at the End of Time reinvented by a chimera of Kim Newman, Philip José Farmer, and Belgian nihilist surrealist Jacques Sternberg, and you'll get an idea of the strange atmosphere of this dense and mindwarping novel. Cosmic concepts, depressing sex, horrific crimes, and pulp heroes ... what more could you want?"
–The Magazine of Fantasy & Science Fiction


"The book is excellent. I recommend this one very highly, with the proviso that the reader will only enjoy it if they happen to like a great number of different types of writing; from great literature to comic books, pulp magazines, penny dreadfuls, etc."
–Casebook: Jack the Ripper


The ebook edition of An East Wind Coming is available now – with a trade paperback edition arriving June 2016.


"It takes the materials of everyday entertainments—pulp heroes, movies, comics, detective stories—and transforms them ... into a gestalt that is fresh ... the lawyer is modeled after Doc Savage's sidekick, 'Ham,' Brig. Gen. Theodore Marley Brooks; the fat man is Sidney Greenstreet; the gunsel is Elisha Cook, Jr. in The Maltese Falcon; the Big Red Cheese is Captain Marvel; the Insidious Oriental Doctor is Fu Manchu; the Queen of England who calls herself a virgin is Elizabeth I; the ace reporter is Lois Lane; the zanny imp from the Fifth Dimension is Mr. Mxyzptlk, and both the imp and Lois are, of course, from the Superman comics; the godlike man with no name is Clint Eastwood in the Sergio Leone-directed spaghetti westerns; the galactic hero with two right arms is Harry Harrison's Bill, the Galactic Hero; the fuzzy (but boring) little green balls of Sharkosh are Star Trek scenarist David Gerrold's tribbles; and you can figure out for yourself the true identities or esoteric references for The Ebony Kings, the poet, the shrink, the bems, the other fat man and his witty leg man, and on and on."
–Harlan Ellison, on Autumn Angels