Digital Parchment Services (distributed by Futures-Past Editions) and M.Christian are pleased to announce the imminent release of a brand new science fiction anthology edited by M.Christian:
Five To The Future
All New Novelettes of Tomorrow and Beyond 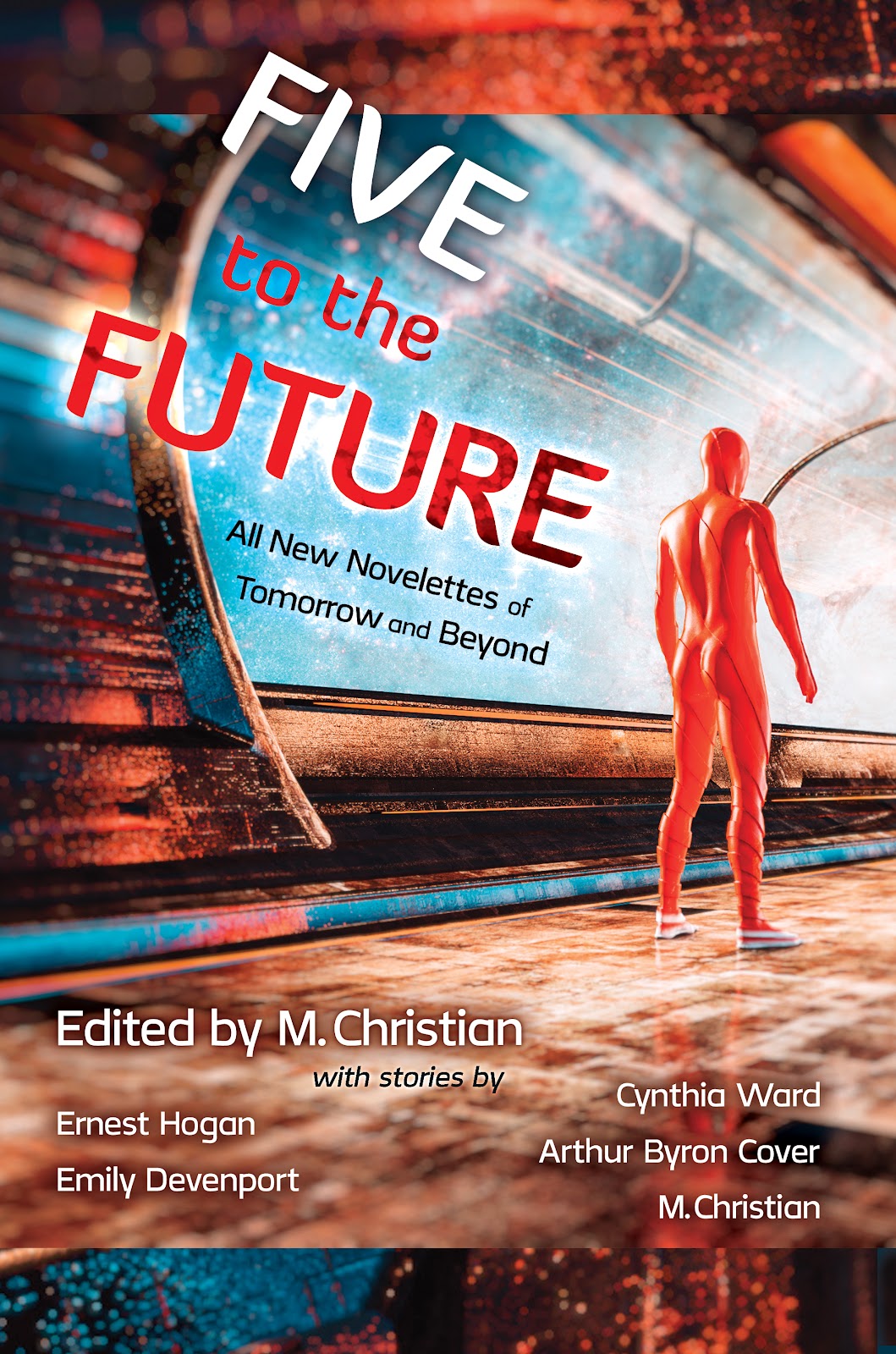 Here’s what editor M.Christian says about this new anthology:


And here we are: a Chicano fiesta of multicultural caliente salsa from Ernest Hogan, a soul-touching tale of furry friends and bittersweet affection by Emily Devenport, a neon-highlighted 80s love letter to a classic anime by Cynthia Ward, a multi-dimensionally kaleidoscopic tale of love beyond reality by Arthur Byron Cover, and even my own modest contribution in four stories as one, about the Soviet-era practice of smuggling Western music impressed onto discarded X-rays.


About the contributors to Five To The Future:


Extensively published in science fiction, fantasy, horror, thrillers, and non-fiction, it is in erotica that M.Christian has become an acknowledged master, with more than 400 sales in such anthologies as Best American Erotica, Best Gay Erotica, Best Lesbian Erotica, Best Bisexual Erotica, Best Fetish Erotica, and in fact too many anthologies, magazines, and sites to name.


But M.Christian has other tricks up his literary sleeve: in addition to writing, he is a prolific and respected anthologist, having edited twenty-five anthologies to date including The Mammoth Book of Future Cops, The Mammoth Book of Tales of the Road (with Maxim Jakubowksi); Confessions, Garden of Perverse, Amazons (with Sage Vivant), and many more.


Arthur Byron Cover is a former bookseller, critic, and big mouth. He published several sf novels in another era. He was raised in Tazewell, Virginia, which is in Tazewell County, which was named after a man who opposed the formation of the county until he learned it was going to be named after him. He is one degree of separation from F. Scott Fitzgerald, former President Clinton, Nelson Mandela, and a whole lot of rich and famous people in liberal Hollywood, many still alive. He currently lives with his wife and six pets in the middle of nowhere called Packwood, Washington, where the elk roam and the volcanoes haven’t erupted for thirty years.


Nine of Emily Devenport’s novels were published in the US by NAL/Roc, under three pen names. She has also been published in the U.K., Italy, China, and Israel. Her novels are Shade, Larissa, Scorpianne, EggHeads, The Kronos Condition, GodHeads, Broken Time (which was nominated for the Philip K. Dick Award), Belarus, and Enemies. Her newest novels, The Night Shifters and Spirits of Glory, are in ebook form on Amazon, Smashwords, etc. She is currently working on a novel based on her popular novelette, “The Servant.”


Her short stories were published in Asimov’s SF Magazine, the Full Spectrum anthology, The Mammoth Book of Kaiju, Uncanny, Cicada , Science Fiction World, Clarkesworld, and Aboriginal SF, whose readers voted her a Boomerang Award (which turned out to be an actual boomerang). She blogs at www.emsjoiedeweird.com.


One day Em hopes to become a geologist. She volunteers at the Desert Botanical Garden in Phoenix and works in the Heard Museum bookstore (Books & More). She is married to artist/writer Ernest Hogan, and they live in Arizona, the Geology Capital of the World.


And she really loves cake. You should send her cake. (But not pineapple upside-down cake. That’s fake cake.)


Ernest Hogan is a six-foot tall Aztec leprechaun who was born in East LA back in the Atomic Age. His mother’s name was Garcia, and his parents weren’t aware of Ernest Hogan, the Father of Ragtime. He grew up in West Covina, considered to be one of the most boring places in California. Monster movies, comic books, and science fiction saved his life. Because he is the author of High Aztech, Smoking Mirror Blues, and Cortez on Jupiter, he is considered to be the Father of Chicano Science Fiction, though there hasn’t been any kind of DNA test. His short fiction has appeared in Amazing Stories, Analog, Science Fiction Age, and many other publications, His story “The Frankenstein Penis,” has been made into student films. He is also an artist and cartoonist. He has been recently been discovered by academia, which may bring about the end of Western Civilization. His “Chicanonautica Manifesto” appeared in Aztlan: A Journal of Chicano Studies. He is married to the writer Emily Devenport.


They live in Arizona, and enjoy exploring the Wild West. He blogs at mondoernesto.com and labloga.blogspot.com. Currently, he’s trying to finish several novels, but keeps getting distracted by all kinds of weird shit.


Cynthia Ward has published stories in Asimov's Science Fiction, Shattered Prism, Weird Tales, Athena's Daughters (Silence in the Library Publishing), and other anthologies and magazines. Her stories "Norms" and "#rising" made the Tangent Online Recommended Reading List for 2011 and 2014. She edited the anthologies Lost Trails: Forgotten Tales of the Weird West Volumes One and Two for WolfSinger Publications, and has a pair of anthologies forthcoming in collaboration with Charles G. Waugh, the first science fiction professional she ever met. With Nisi Shawl, Cynthia co-created the groundbreaking Writing the Other fiction writers workshop and coauthored the diversity fiction-writing handbook Writing the Other: A Practical Approach (Aqueduct Press).  Her short alternate-history novel, The Adventure of the Incognita Countess, is now available from Aqueduct Press. She lives in Los Angeles, where she is not working on a screenplay.


Five To The Future will be formally released in April, 2017.  Pre-release copies for review are available now by writing M.Christian: mchristianzobop@gmail.com.